Slowdive are very excited to announce their performance at this year’s Pitchfork Music Festival in Chicago, USA. Tickets can be found here.

For all that have ordered shirts! The T-shirts have just arrived and they look great! We will be posting the shirts to all corners of the world ourselves and are just waiting for something to send to everyone who orders a shirt but they won’t arrive at Slowdive HQ for another week. Please expect your items at the end of February! With thanks, s l o w d i v e 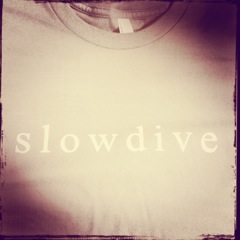 Slowdive will be coming to Portugal this summer. The band will play Optimus Primavera Sound in Porto in June.

Slowdive will be performing at this year’s Latitude Festival in Suffolk UK and at Oya Festival in Oslo, Norway.

21st May 1994, at Lee’s Palace in Toronto, Canada. We’d finished our set and rather uncharacteristically for the time, Christian had put down his guitar, picked up a large union flag that we’d been given (Britpop was at its height back then), held it aloft, and dived (slowly) into the crowd. Although we didn’t know it at the time, that was to be the last live performance of any kind by Slowdive.

Over the years, everyone went their separate ways, some staying in music and some not. Neil, Rachel and Ian carried on with Mojave 3 and relocated to the South West of England. Simon had previously returned to Cambridge to play with different bands and musicians, and ended up releasing music in his own right. Christian and Nick remained in the Reading area and stayed in regular contact. All the time however, the subject of Slowdive never seemed to completely go away. Neil and Rachel would always be asked in interviews whether there was any chance of any more shows, or any new music. The answer was always no, but the interest from people wouldn’t disappear. Finally Neil was asked by MTV in the summer of 2012, and for the first time he responded that he was possibly open to the idea.

So eventually, late in 2013 – we all met up in London to talk about the possibility of doing another record and some shows, really at first to see if anyone other than journalists were still REALLY interested.. What properly kick-started it for us though was when we got a lovely offer from Primavera Sound to appear on the 2014 bill in Barcelona. We had never played in Spain before, and the idea of playing a part in what we were sure would be a fantastic line-up was too good to turn down. This was swiftly followed by the offer of a first show in London at Village Underground on the 19th May 2014. Almost 20 years to the day since the final show in Toronto. The stars seemed to be lining up…

Since then we’ve been busy going through old recordings, looking through old press clippings and trying to remember how the songs should be played. We’ve been really pleasantly surprised to see that there still seems to be a genuine interest in the band out there! Neil has quickly realised that he’s going to need to re-learn how to play an electric guitar (as opposed to his more normal acoustic), otherwise we are going to require a hell of a lot of spare strings when it comes to playing live. Nick hadn’t picked up a bass guitar since the last Pygmalion sessions so is having to start from scratch, and Rachel, Christian and Simon have had to reacquaint themselves with the Slowdive sound and style – very different to what they’ve personally been doing over the last few years. So the first rehearsals have been challenging, but fun. And it’s great to have all five of us making some noise back in Reading together.

Our intention is to update this blog regularly with news and info, and perhaps even a picture or two. You can also follow us on Twitter (@slowdiveband), Facebook (facebook.com/Slowdive) and Instagram (instagram.com/SlowdiveOfficial). We will be announcing more shows over the coming weeks, we are looking forward to returning to some old haunts and especially going to some places we’ve never visited too. Any suggestions?

Slowdive will perform at the Village Underground in London on May 19th 2014. Tickets go on sale on Friday 31st January at 9am at http://www.atpfestival.com/events/slowdivelondon2014/tickets.php

Slowdive are very excited to announce their performance at Primavera Sound 2014 in Barcelona on May 30th. More info and announcements to follow.